Be Here for Your Nashville Demo Session Without Actually Being in Nashville! 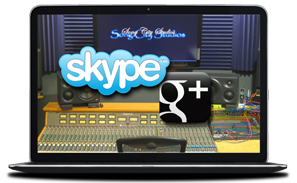 We bring Nashville to you! You can now ‘virtually’ be in Nashville for your Nashville demo session! We’ve been successfully tracking Nashville Demos as well as Master sessions via Skype and Google+ for a long time now. Our U.S., Canadian, and international clients love it! Even our local clients love it for its convenience. It works out great for everyone!

When we Skype or Google+ you for your session slot, you will have video access, and a clean audio feed from the board. All you need at the very least, are ear-buds, or a decent set of speakers connected to your computer, iPad, iPhone, or Android on a good connection. You will hear everything as good as if you were here in real-time! This way you can have direct communication with your producer while your tracks are going down LIVE.

About Our Price Charts

We have 3 different Sets of price tables on this page, followed by more details. Our different demo package options are designed to specifically fit different needs and/or demo budgets. At the bottom of the page, we have a playlist of some sessions we’ve done, so you can listen to the quality of our full production work.

The 3 price tables and playlist are in the following order and are hyperlinked for your convenience:

The following 3 price charts, directly below this box, are our Platinum, Gold, and Silver ‘Produced, Mixed and Mastered’ demo packages. These Full Production demo packages are the most popular turnkey approach among our Nashville Demo clients. With these packages your songs are completed quickly and effectively by industry professionals from start to finish with a commercial sheen that is undeniable. We also mix and master your with these packages, to make them stand up to anything you hear on radio.

We recommend our mixed and mastered demos if you really want a “Wow!! Where did you record that!!” kind of response from those who hear your songs. These packages impresses publishers and producers alike. Our mixed and mastered tracks are Song City’s best calling card.

What Does RAW Mean?

‘RAW’ means ‘RAW, Un-Mixed TRACKS.’
The following price charts, directly below this box, applies to our Platinum, Gold, and Silver, RAW recorded Nashville Demo tracks, produced in our Trident room. They are produced and recorded, then compiled to a single file per track part and sent to you raw and untreated.

We essentially pre-produce and then record your tracks within our package parameters and send them to you in raw 24-bit Broadcast Wave format, un-mixed.

To be clear, the packages directly below this box do not include a vocalist, nor does it include mixing or mastering.

This is an even more affordable package if you happen to be a well-seasoned studio engineer and/or singer/engineer, or a producer/engineer who is equipped with the skills to mix and finish the work on your own. If you simply desire to capture well-performed, RAW tracks by world-class Nashville talent, recorded in a well-tuned, industry grade environment, under the guidance of a well-seasoned Nashville producer, and can mix the tracks yourself, then this is a great deal for you!

It is important to note that great finished masters require great skill. If your goal is to get a demo done with little time or trouble, then our ‘Mixed and Mastered’ packages above this box are your better option.

What if I want Vocals?

If you would like to have one of our vocalists, or any vocalist you would like to introduce to us, tracked here in our studio, then simply add the price of the vocalist + $90 flat rate for 1 hr studio time to track the vocalist. This is also a great deal because rarely do we track a vocal in under an hour. It usually goes beyond an hour. The flat vocal tracking rate does NOT include going beyond 2 hours tracking time, and it also does NOT include tuning or extensive editing. We send you a straight-forward compilation file of the vocal passes and punches that we all decide are “the keepers” during tracking. There is an additional $90/hour for vocal tracking if it runs beyond 2 hours.

Our competitive Gold and Platinum LIVE BAND Demo packages listed above, are all tracked real-time during what we call a ‘slam-jam’ session, here at Song City in our Trident Room. We use some of the most seasoned, and credited musicians in Nashville. The players we use have played on several hit artists records, such as Alan Jackson, Garth Brooks, Taylor Swift, and more. Unlike our Silver packages, these tracks all go down LIVE with all the players on the same session.

FREE Pre-Production and Song Charting*
All songs submitted to be demoed will receive a FREE complimentary Pre-Production meeting, via Skype or over the phone, with our experienced Nashville producer, Dave Demay. Dave has nearly 30 years of production under his belt, and as a producer engineer he stays current to the marketplace with his ear, his ideas, and his mixing approaches.

Song Charting is FREE, but the only time that additional charting fees come into play, is if an extraordinary amount of extensive composition is involved, which you can read more about by clicking on any of the links in this paragraph.

Time Slots
Each demo gets an average tracking slot of not much more than 30 minutes with the band, with producer, Dave Demay, at the helm insuring the client’s pre-production requests are being met to the client’s satisfaction. We know 30 minutes ‘seems’ like a short window to cut your song, but as you can tell when you listen to our demo playlist, our master-level A-Team musicians are amazingly efficient, quick and effective at getting you the best demo that you can get at such an incredible bargain. They are attentive to being aware of each song’s theme, its material substance, and they make sure to give every song a unique approach. They are awesome at what they do.

Dave has worked with these musicians for several years. Some for more than a decade and others, longer than that. Although other elements are very important to the final process, musician selection and a quality recording environment is a crucial first step.

Shared Sessions
Our extremely competitive demo packages are possible because they are recorded on sessions that are shared with other songwriters who are having their songs cut also. This collective of writers helps add more songs to our sessions, making it more affordable to bring the live band together. This is one of the things that makes our pricing so competitive, given what all is included.

Studio Time
These demo packages include up to 3 hours of studio time for vocals and mixing. Additional studio time that goes beyond what is allotted in the package is $100/hour.

For the more budget-restricted songwriters and publishers, our Silver overdub ‘Build-Out’ packages, either the “Mixed and Mastered” Silver package, or our “RAW” tracks are unique in the sense that all the instruments and vocals are overdubbed one part at a time and we use top-quality drum samples (Superior Drummer) to sequence the drums. The bass may be played using keyboard samples or a real bass. The bass sample is very convincing and the fact that it is a sample is virtually undetectable outside of certain human and stylistic characteristics.

Although most agree that nothing quite matches the vibrant energy and spontaneity of a LIVE band performance when they are all tracking at the same time and feeding off one another in the moment, but the Silver ‘build-out’ Package this is an excellent alternative if your finances cannot fit into a LIVE band budget. So be sure to take a look at either our “Mixed and Mastered” Silver package, or our “RAW Demo” Silver package.

Give us a call:

Or email us at: studio@songcity.com